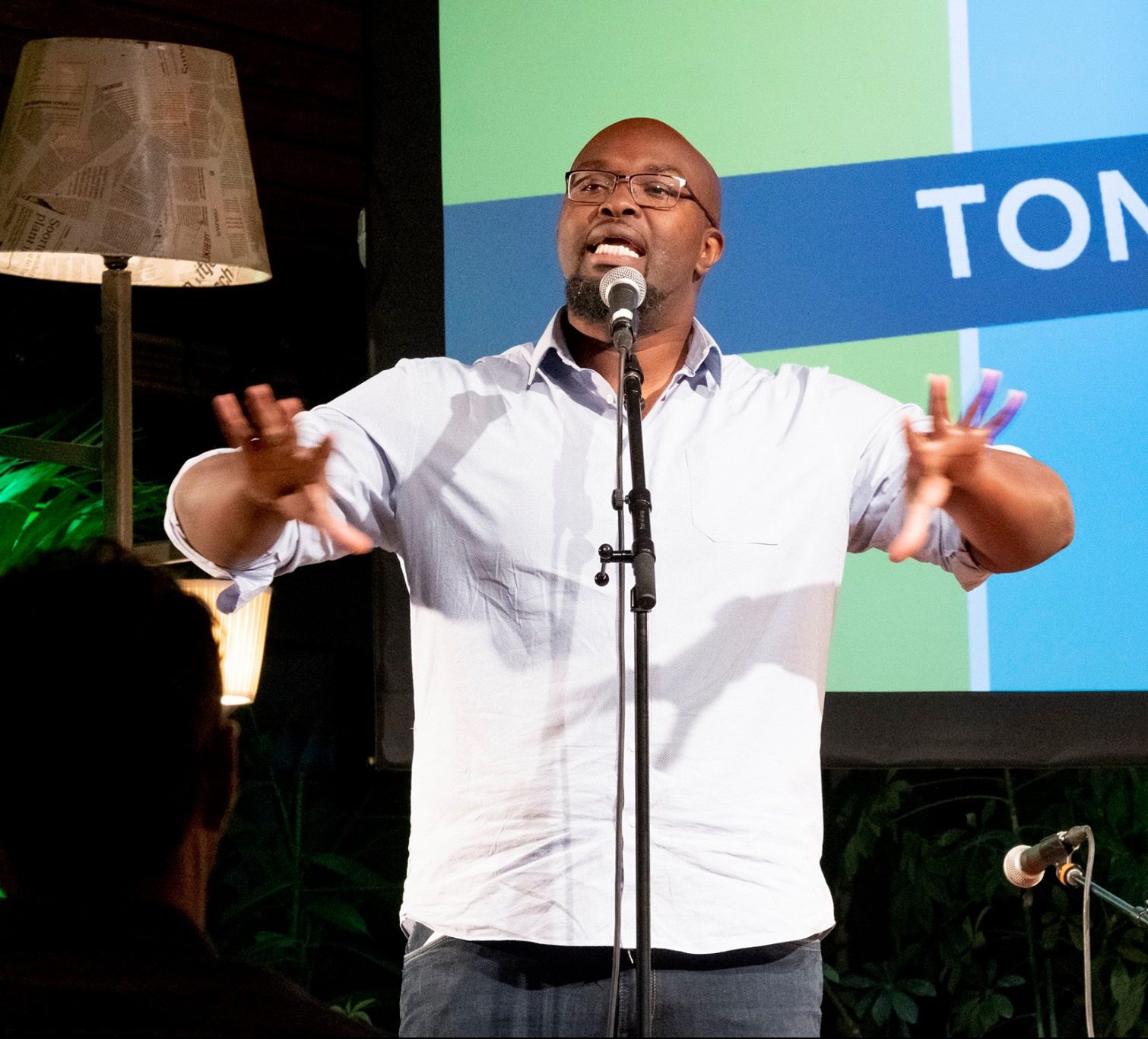 As I am writing this, I am dunking myself into some good old sweet nostalgia. As best as I can remember I am reminiscing about a time where Surinamese music, music period, graced the speakers in my childhood home. Music has played such an integral part in my formative years, that even now, when I am writing poetry or spokenword pieces, I use songs either to inspire me or to create a rhythm. I wasn’t even aware of the significance of its impact until Read my world approached me for this. I searched my mental archives for references containing books and stories, and my relationship with them, only to come up somewhat short. But I forgot the main player in my artistic career.

Allow me to set the scene. It’s a beautiful Saturday morning around 10. The night before you fell asleep listening to your dad and his friends talking, reminiscing discussing and joking around. One moment you were listening on the couch, and trough some sort of childhood magic, you wake up in your bed. Outside it’s blue skies all around, the air rife with bird sounds and you could swear that you can smell the sun. And at that moment, you hear the sound of Nat king Cole’s: Unforgettable, Diana ross and the Supremes: Baby Love, The Eagles hotel California, and  The temptations, The four tops, Gladys knight, Dutch bands like the Cats with one way wind and be my day.. My dad was playing records. He had a magnificent collection that he was so proud off. Come to think of it, he loved us, but he was in love with his record collection. My sister and I were allowed to do anything in that house, BUT we were never to touch the records. Now you would think that these rules would only apply to us kids.. but no.. his darling wife my mom, also wasn’t allowed in a 3 foot radius around that record collection. That was how important that music was to him.

Now my dad never sat me down and explained to me who was who and what was wat pertaining to his record collection. He didn’t need to. If you get immersed in an environment long enough it will permeate trough your skin. He used to buy cassette tapes that we would play during long car rides. And during the hottest parts of the day, when everyone had their siesta, I would sneak into the car, switch on the car electrics and while I was pretending to drive the car, I played my favorite cassette tapes.

When I turned about 8 or 9 years old, my dad bought an audio tower. You know the big ones with two large speakers and the record player on top. Ours could play records, tapes AND cd’s. And this changed the music in the car drastically. Because now he would make his own mixtapes during car rides. He also made tapes for me, I think while everyone else was listening to new kids on the block MC hammer and the likes, I was the only one listening to Ray Charles and Stevie wonder.

He also had en extensive collection of Surinamese artist. Who played Kawina and Kaseko music. A music style that evolved from the music that the enslaved people played. And that music was very distinctive, it didn’t have a rhyming scheme and a distinctive hook as western music had, it was more of a call and answer type of situation. But they told relatable stories, filled with proverbs and wise sayings.

And slowly I started to see a pattern in how my dad played music. When he was playing his records he would always search and search until he found that special album with a certain song. And then he would build a stack of records and he would play them for about an hour. But this is what he did, he would for instance play Etta James, I’d rather Go blind.

A song that starts with the lyrics:

Etta James tells the story of how she lost her boyfriend to another woman and it cut her to the bone. After that record he would for instance play The Supremes: Where did our love go.

And that song starts with the lyrics:

Or he would play Bill withers:  Who is he to you? A record where a man finds out that his girlfriend is dating someone else, and she tried to set him up. After that he could play Ray Charles who would sing: Don’t let the sun catch you crying, lying by my front door. You did me dirty honey and I don’t want you no more.

My dad was creating his own narrative based on the lyrics and the songs people wrote. Combining storylines, making plots. And the songs that he chose told stories by themselves. And by playing the music in a certain order, it was storytelling inside storytelling. Call it a soulful inception.  And as I am writing this, I understand why I like to create overarching storylines in my plays. Why I love to create meaning in two sentences that can either stand alone, or be a part of something greater. I remembered that storytelling is more than just literature and manuscripts. It is in literal storytelling, the way it is presented, the arena in which it takes place, it is in music and the songs that you play and WHY you play them. When I got this assignment, I was worried because I discovered that when it comes to books, I hadn’t been influenced by writers of color, either Surinamese or from somewhere else. And that saddened me. But writing this made me realize that for me I had been inspired by the greatest storyteller of all. My dad.