Sharda Ganga (1966) is a theatre maker and columnist. She is director of Projekta, an NGO with which she structurally subjects contemporary Surinamese society to critical research. She was one of the curators of Read My World 2014, focusing on the Caribbean.

Purcy Tjin is an actor and visual artist from Paramaribo, Suriname. According to him, art is not complicated. ‘I can’t put into words what I paint and draw. It will be understood differently than I intended it anyway. So, make up your own story about my work. There is no such thing as abstract art.’ 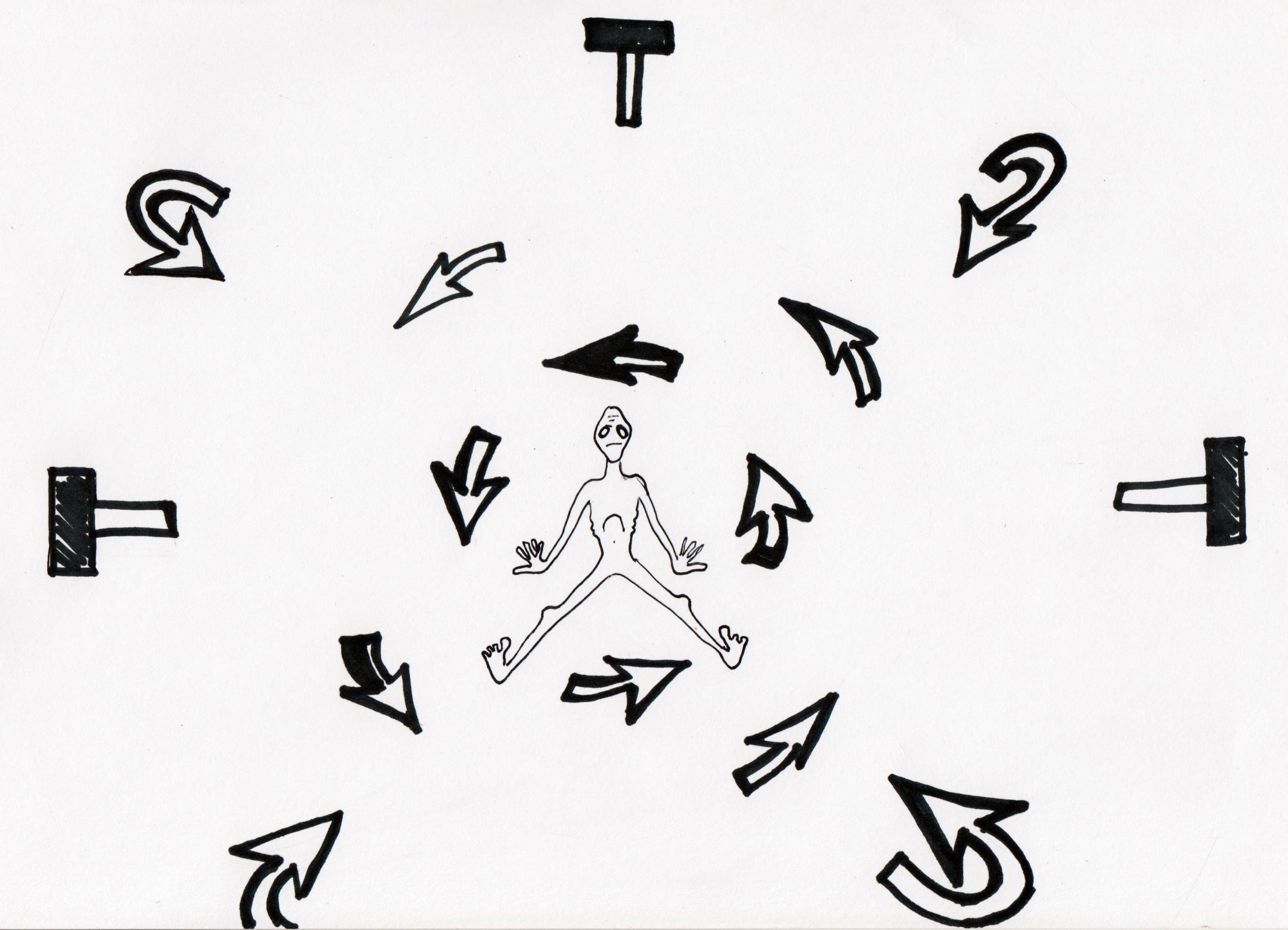 A good Surinamese-Hindu girl learns to make roti at an early age. During family gatherings, as soon as the sun rises, she joins the other women of the family in the tent, getting ready for roti service. Upon arrival, she is assigned a place in the production process: she can make the loi – turning pieces of dough into balls. Those balls are flattened in step two, and then filled with yellow peas by the third team. They are then rolled out into perfectly round roti, after which the process ends on the cast iron baking tray – the tawa. That fifth step is the least popular. Baking hundreds of roti over an open fire in the tropical heat, under a zinc roof, is not for the sensitive souls.

I, too, participated in this factory until I was 20 years old. My inability to roll a perfect ball or to fill a roti without holes made me quickly exiled to the tawa. The fact that I cooperated without too much reluctance was because of the stories. I discovered that most of my full of life aunts were married off as children. They thought that was absolutely normal. One aunt told me that she slept with her parents-in-law until her first period, after which she was offhandedly ordered to move to her husband’s room. “He came to lie on top of me,” she said. “And then he did something and I shouted, ‘You pissed on me, you pissed on me!’ But it wasn’t piss.” She had a good laugh about it. I couldn’t understand this joy.

One day, a few thousand roti’s later, I did the unthinkable – I packed my bag and left the parental home, unmarried. I never took part in party preparations again, and I never tried to make roti again. Until COVID-19.

In the Caribbean, we expect our COVID hit to come when the rest of the world opens up again. History has taught us that the only newsworthy misery is the misery that strikes the countries that have elevated themselves to the centre of the universe. When our blow comes, people will probably be sitting on terraces in Amsterdam, and schools will be open to shooting again in the United States. So, we don’t have to count on solidarity. It was already scarce before COVID and became even scarcer during COVID. Globalisation. Since Suriname is virtually bankrupt, I foresee harsh times, with or without corona. I therefore started rolling out long-term survival strategies.

“What all the aunts and mothers never succeeded in doing, did happen through a microscopic piece of genetic material enveloped in a thin layer of fat. I baked roti’s last week.”

What all the aunts and mothers never succeeded in doing, did happen through a microscopic piece of genetic material enveloped in a thin layer of fat. I baked roti’s last week. They were rectangular hard as stone pieces of dough, but after a few attempts they will become edible. If you can make roti, you don’t have to buy bread.

I’m assuming COVID-19 can change my life tremendously. And the fact that COVID-19 can change my life enormously shows how privileged I am. If your life was hell before COVID, not much will change. It will just be a degree or two, three worse. You already had too little food, now you have even less. You already had no income, now you don’t have any. You never went on a trip, and that will not happen now. No job? There’s now even less chances to get one. Do you live in the house with your tyrant? Now you can’t even run away.