Max Czollek was born in 1987 in East Berlin. He is a poet, essayist, and editor of the magazine Jalta—Positionen zur jüdischen Gegenwart. His most recent volume of poetry, Grenzwerte was published in 2019 by Verlagshaus Berlin. His second nonfiction work, Gegenwartsbewältigung will be published in August of this year.

Anja Nolte, based in Berlin, works as a freelance illustrator, artist and author. Her works regularly receives awards – one of the highlights: the Jospeh Binder Award SILVER for her book about Munich. Nolte’s work philosophy: constant transformation and development. Stay curious!

A Letter on Solidarity 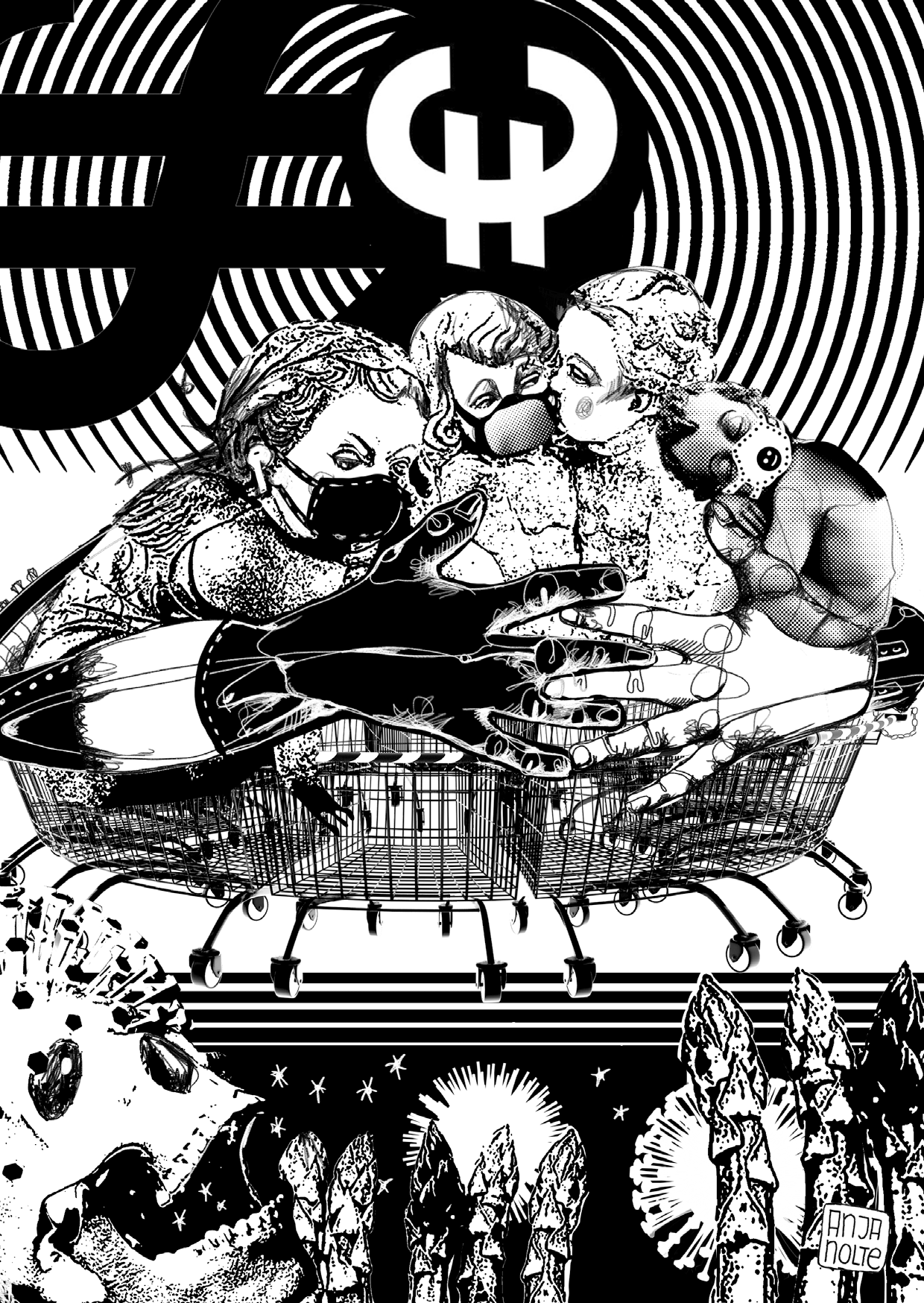 On May 8th, Germany celebrated the three-quarter-century anniversary of Nazi Germany’s capitulation in 1945. In keeping with the ongoing situation around Covid-19, the city of Berlin launched a digital theme week—“75 Years After the War”—to accompany the special holiday that had been called to mark the occasion. In the days leading up to these events, advertisements went up across the city, covering the ragged posters which have hung from columns and cyclone fencing since mid-March and lent the urban spaces here a post-apocalyptic atmosphere. The caption on the new posters seems apt: “Do you want what you vote for?” [Willst du, was du wählst?], the subtitle less so: “Europe’s Liberation from National Socialism.”

“Public remembering in Germany sometimes feels like a redemption story.”

Public remembering in Germany sometimes feels like a redemption story. We speak of Europe’s liberation as though the whole continent had been healed of a Nazi virus and not fought a long war of attrition against the politics and ideology of a particular country, with particular positions and policies. Commemoration politics can be revealing. In the same spirit, the events surrounding the virus SARS-CoV-2 have been instrumental in facilitating an image of German society as we would like for it to be: a pluralistic democracy, critical of any and all forms of discrimination, and unified in common solidarity.

Because this letter is about love, I have decided to dedicate it to the peculiar theme of common solidarity. To understand the particular insolence of this notion, it might be helpful to cast a glance back over the first months of 2020, specifically those days stretching in February from the cooperation between the CDU, FDP, and AfD in Thuringia to the attacks in Hanau, Saxony, where a rightwing terrorist murdered ten people on a shooting spree. Do you remember when—in reaction to these atrocities—people stood at their windows and clapped in solidarity with the victims of rightwing terror or against political cooperation with the far-right AfD? Me, neither.

If one brings even this one month before the virus shutdown into consideration, it becomes painfully clear that coronavirus solidarity does not pick-up on a tradition of all-encompassing solidarity in Germany. Rather, we know from the last years that solidarity operates in this country within the narrow confines of nationalism, capitalism, and racism, just as it operates elsewhere, as well. The largely absent support for refugees at the Turkish-Greek border, like the epidemiologically negligent deployment of seasonal workers for the harvest of asparagus in Germany, are not exceptions to the general rule of solidarity. They are, in fact, intrinsic to a solidarity which differentiates between those who deserve to live and be protected—and those who do not.

Closer examination thus reveals the contours of a solidarity which is in no way the expression of the much desired and often conjured-up image of a pluralistic, solidary democracy which remains critical of any and all forms of discrimination. On the contrary! This current solidarity stands in continuity with a German tradition stretching from völkisch thought to cultural hegemony, and presently expressed through the demand for deutsche Leitkultur. Or do you really believe that measures in the coronavirus era have been enacted to protect migrants or those experiencing homelessness?

“If we want to think about love in the era of the pandemic, let us not forget about the exclusive manner in which love tends to manifest these days.”

These insights could provide the occasion to start thinking long and hard about the discrepancies between self-image and reality. But instead, this society seems unable to stop patting itself on the back: for voluntarily self-isolating, for not letting senior citizens die, for celebrating May 8th as the liberation of Europe from National Socialism. Germany was in no way liberated 75 years ago like the rest of Europe. If anything, the rest of Europe was liberated from Germany. The dominant perspectives on both history and the present in this country fulfill a need for self-exoneration. This need was underscored by a single line in the Federal President’s 2020 Easter speech: “You have all saved lives” [Sie alle haben Leben gerettet].

Surely “we all” have—through our behavior—contributed to saving particular lives in Germany. But people are still dying nonetheless at the external borders and on German vegetable fields—despite and because of “all of us.” Given these dual certainties, those who feel reassured by Steinmeier’s speech are simply swallowing the bait of a limited memory and limited solidarity hook, line, and sinker.

If we want to think about love in the era of the pandemic, let us not forget about the exclusive manner in which love tends to manifest these days. And no, I am not proposing a polyamorous model for German society, but simply posing the question as to whether love is the right concept for dealing with our present challenges. After all, society is not about loving everyone, but, rather, about respecting every individual’s claim to the same rights and protection you enjoy. The promise of the State is to provide this protection. The promise of civil society must be to assure its just distribution: either to all or none.