SLAA and Read My World present Current Literary Affairs! CLA is a podcast about current events through the lens of literature. Reporter Gülden Ilmaz engages in conversation with writers from all over the world. How do the political circumstances in their country of residence influence their life and work? What are the topics we really should be talking about? CLA brings urgent conversation about fear and hope, outrage and pride, personal and political topics, books and art.

In the first pilot episode you listen to Palestinian author Sayed Kashua. Gülden speaks to him about language and identity, the harsh reality Palestinians have to deal with, and what is left of his hopes for Israel and Palestine.

This podcast is in English. The first episode is a pilot, which will be followed by a special festival edition at the Read My World Festival in Amsterdam. And after that? We hope to come back to you every six weeks with a new international author! 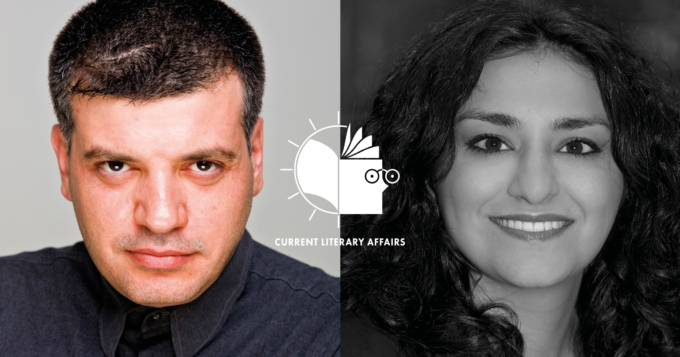 Sayed Kashua is a Palestinian journalist, writer and screenwriter from Israel. He is known for his columns in Ha’aretz and wrote several novels, among which Let it Be Morning, the film adaptation of which is going to Cannes this year, and his most recent novel Track Changes. For Israelian television he wrote a series about a Palestinian family called Arab Labor, and together with David Simon he is working on a pilot for HBO. For a long time he made it his mission to explore the boundaries of the freedom of speech of Palestinians in Israel. In 2014 he decided to flee the country and move to the United States, where he still lives.

Gülden Ilmaz is a journalist. She read the news at AT5, the Amsterdam local network, and worked for NTR’s De Nieuwe Maan and VPRO’s culture show Mondo. She often moderates debates and presents live talk shows about current events, art and more.

CLA is a collaboration between Read My World and SLAA.

This podcast was realized thanks to Productiehuis Noord, the media channel of ‘Verdedig Noord’.