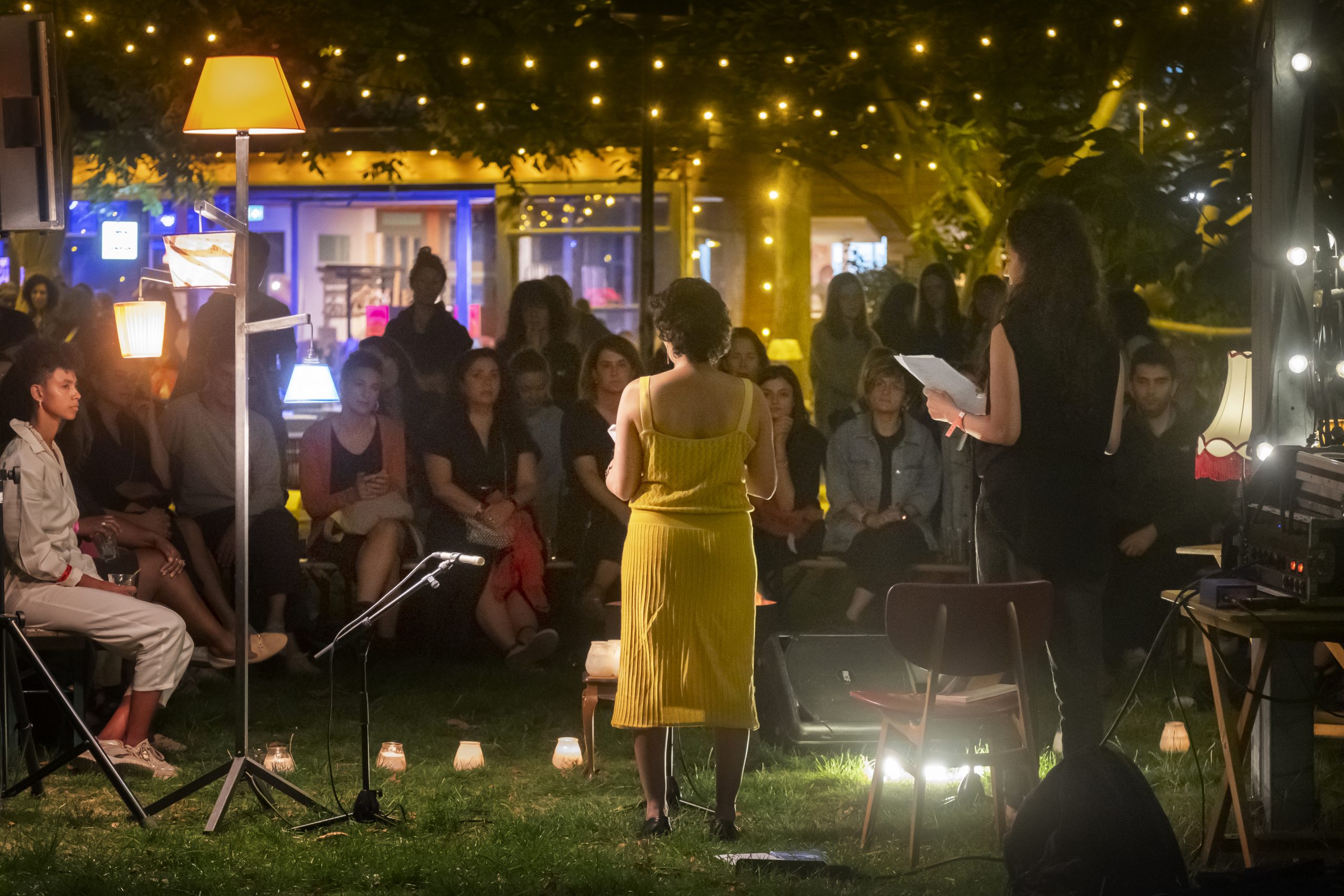 Read My World by Mkadoo press

The year is 2022 and the Read My World festival celebrates a decade of bringing Amsterdam the richest of interdisciplinary literary experiences. The festival is ten years young and yet, much like its director Willemijn Lamp, is wise beyond its years. For example, the Read My World festival hit the ground running in 2013 immediately and successfully de-centering the white gaze in storytelling and it has never once looked back. Since its inception, Read My World refused to profit off of the trauma porn of marginalised identities. Not content to jump on the diversity subsidy bandwagon, Read My World does not now and has never required her esteemed guests to serve up their hardships and only their hardships for consumption.

The short ferry ride from Amsterdam’s Central Railway Station is uneventful and not winding but I couldn’t help feeling sparkling anticipation and suspense in my belly similar to that evoked by the sound of musicians warming up in the orchestra pit before the conductor’s big entrance. The single notes winding in and out of tune, the shards of etudes and arpeggios foreshadow an unknown yet imminent excitement. Well aware that the life I navigate daily is one of not knowing what I do not know, I am enthralled with the possibility of absorbing new words, the energy of new people and their divergent perspectives. 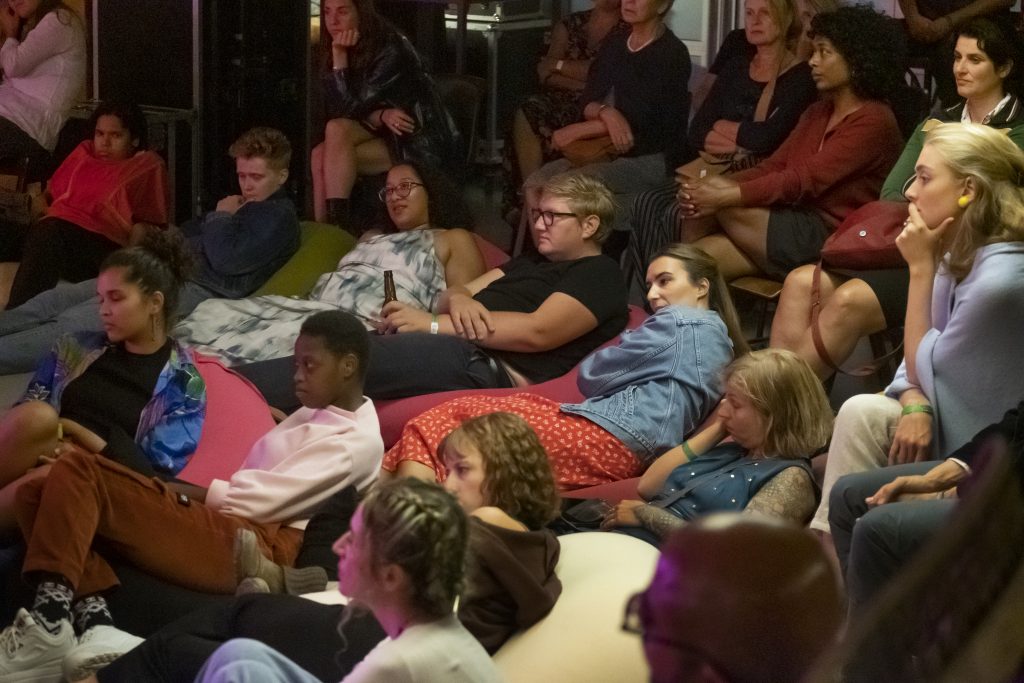 If you’re not local to the area and you happen to arrive at the festival via the ferry as I did, you will find yourself having to make your way past the tourist-trap facades that beckon the visitors and more specifically their wallets to experience Amsterdam Noord.

Exiting the ferry we are immediately made co-conspirators in the Read My World Festival anti-gentrification statement, vision, mission and quite literally its positioning. At least I read it that way. The festival could have succumbed to uninventive urban planning and made the entrance accessible to the day trippers. Instead, reminiscent of a childhood treasure hunt, we’re meant to make our way up, around and through, to where exactly?, in order to reach the garden doors.

The payoff, and there is a payoff, a garden where Read My World extends her warm, leafy myriad of thick trunks and green arms in the direction of the neighbourhood and most importantly, towards her locals first and foremost. Read My World is placemaking in Amsterdam Noord, a district steeled in defence of and holding tight to every last ounce of exuberance amidst the severest bucking broncos of gentrification. Read My World: brimming with national and international talent, bordered by a moat and shrouded in foliage topped off by romantic party lights.

Instead of doing the diversity boogie-woogie as a subsidy and business imperative, Read My World has for ten years jumped into the vortex of the great untold. Read My World did not just suddenly wake up one day in, I don’t know say 2020, and realise that Black Lives and their stories told from their own unique perspectives Mattered.

Read My World has always known what we, the artificially and intentionally marginalised people of the global majority also know: that the winding plots and details of our lives are sublime, complex and worthy of being told. That the telling of which occurs almost always across disciplines. That the truths of our daily existence would absolutely flatten the uninitiated. That the intricacies of our collective interiorities are heady enough to fill a galaxy to its tipping point with poetry and laughter and parables and song. Most importantly, it did not take the gratuitous and tortuous death of a Black person for Read My World to come to these realisations. Read My World does not and has never commodified marginalised death spectacle. Instead, Read My World carves out a space where people of the global majority especially do not have to parade trauma porn for a seat at the cultural table. Yes our stories can and do consist of trauma and pain but that is not all they contain. 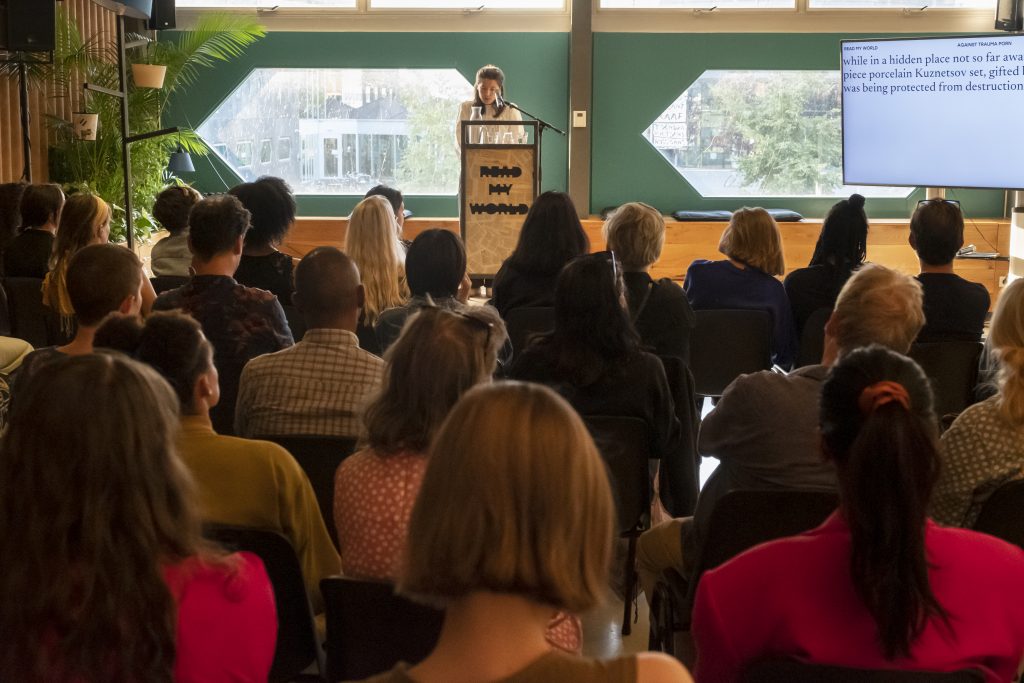 Read My World is a massive Book club

After grounding myself in the garden and allowing myself to be seduced by the lighting and the hum of conversations in multiple languages happening all around me, it was time to make my way to my first RMW experience in the Tuinhuis. The form was a book club introducing a new audience to one of my favourite authors, Octavia Butler and her book Kindred. Sitting there amongst that small book club gathering I felt that particular elusive sense that somewhere in the ether was an antidote (to what exactly?) that only literature can provide. Read My World is a living room book club, an international book club with all the comforts of a living room, an international book club in your living room that makes its way organically into the garden as the night progresses. Read My World is community and communion and the presence of kindred spirits.

Read My World is multilingual and deaf accessible

We may not speak each other’s mother tongue but our words connect us nonetheless..

On the first night Eritrean-British writer Sulaiman Addonia hosted a spectacular evening introducing Asmaa Azaizeh, Dalilla Hermans, Lütfiye Güzel, Karin Karakașli, Vladimir Lucien, Grace Ly, Fedwa Misk, Omar Musa and Maurice Carlos Ruffin. It was incredibly moving and necessary to hear artists share their work in their mother tongues. As such we were so much closer to the authentic emotions and intentions of the performers. For those of us who belong to the deaf/HOH community, the large, translated and projected texts everywhere(!) were an absolute necessity without which the festival would not have been accessible.

Read My World is Intergenerational

Opening night wound down in the garden where even small babies made themselves at home and added a tenderness to the atmosphere.

The following morning I sat in on the culmination of a series of poetry workshops for teenagers. Their words were at once amusing and heart breaking. I felt privileged to be among them as they revealed themselves – no small feat for that age group. Writer Grace Ly spoke to them from the heart when she said that though she doesn’t speak Dutch (the translation of) their words connected with her. The pain they wrote of was her pain too, her loneliness. ”..you don’t know me but it’s like you know me. And I know you. You all talked about my joy and my hope. And that’s incredible”.

On the evening of the second day of the festival I decided it was time for Joy and attended The Language of the Flesh! Hosted by musician Anastasis Sarakatsanos and featuring Fedwa Misk, Sarah, Naqvi and Nadia de Vries, the evening had a deceptively light feel. The placement of a variety of large pillows on the ground belied a subtle invitation to a younger crowd and an intergenerational mix of energy. 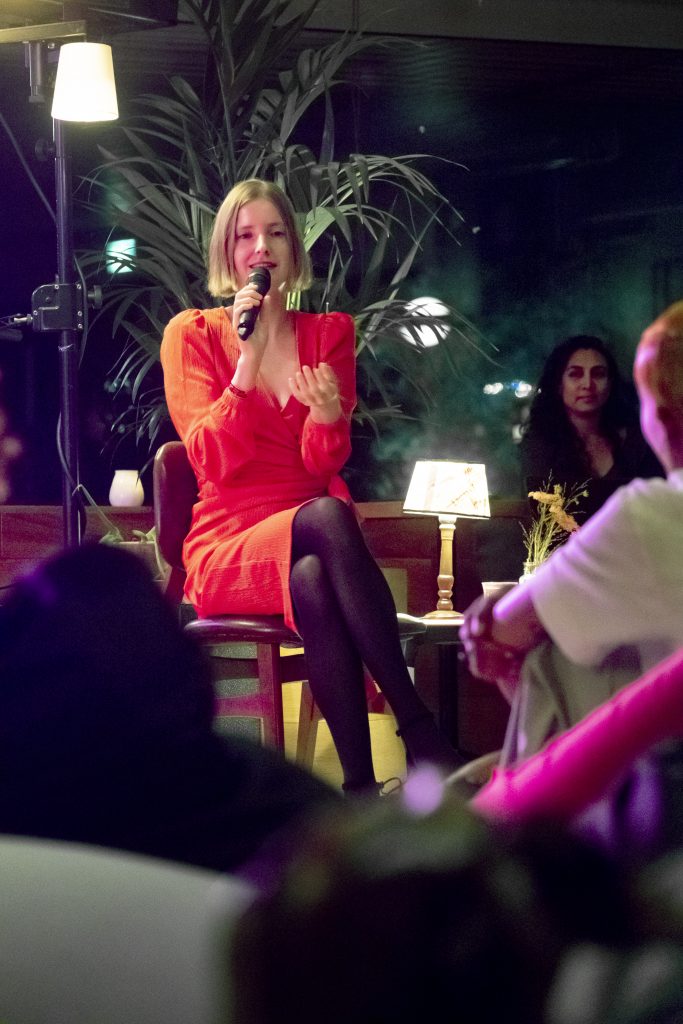 The Band Mushroom Mosis was the glue that held A Letter to Maman together. Tatjana Almuli, Dalilla Hermans, Fedwa Misk sent our hearts and heads spinning with each poem, song, recitation and incantation more heartbreaking than the last.

Read My World is a balm

Embarrassment of literary riches and the fear of missing out

Read My World is a garden bringing the deliberately erased into the light.

Read My World is both a mother tree and a rhizome of inspiration.

Willemijn Lamp and her team invite the world into their backyard to bear witness as they sculpt a festival that is at once elegiac and mournful yet successful in incorporating a quantum level of complexity and ecstasy. We are left smiling, possibly laughing through tears of joy and commiseration.