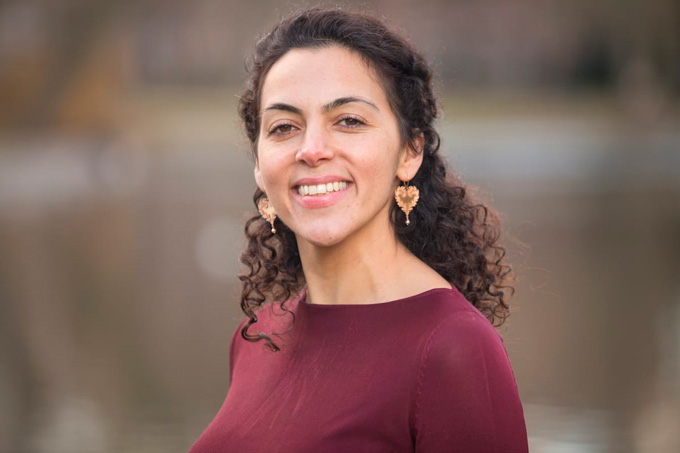 “There was once a child playing in the hood.. searching for threads to fly a kite, he looked up
to the sky and wondered, what is that thing shimmering: look look, a plane.. a plane coming to me..
it is a big plane that doesn’t need threads, its wings are larger than the house of our neighbors..”

My dad used to sing the first couplets of this song “the child and the plane” to my brother and I in bed to put us to sleep.

My father would repeat these couplets twice, then make up his own variation on the melody to finish it, while we joint him accelerating the melody and rolling between warm sheets of giggles. He never sang us the rest of the song.

Years later, when I heard the rest of the song on the radio, I realized that by stopping at these couplets, he safeguarded us from the sadness of the story told in this song. Because in the following couplets, the child won’t be able to fly his kite anymore since the sky is taken over by bigger planes that are bombing his town, and all the squares are evacuated.

It is a poem by the Lebanese Shawki Bzei, who wrote it after an Israeli air raid on his village in southern Lebanon, had killed a number of children playing in its square. The Lebanese composer and singer Marcel Khalife made it into a song.

From the many sweet songs my father could have sung for us to go to bed, he chose to tell us a real but incomplete story. Remaining honest to the reality we grew up in and the fears he was living, and at the same time finding his way assisted by the poetry to offer us a sky to fly our imagination through, without denying that which was around us, which was a terror beyond any imagination.

I grew up with songs, with poetry- often made popular through singing. The poetry of the Palestinian Mahmmoud Darwich sang by the Lebanese Marcel khalife, the poetry of the Egyptian Ahmad Fouad Nejm sang by Cheikh Imam, the poetry of Khalil Gibran and Saeed Akl sang by Fairuz, of Ahmad Shawqi and Bayram al Tunisi sang by Um koulthoum, and the radio satirical musicals of Ziad Rahbanni.

Their writing spoke of the earth, of belonging, borders, injustice, resistance, corruption, love, love, love, the moon, grief, loss, the wind, wine and bread. The word in their poetry, was a space to dwell- to be together. Not as a mass or a crowd but as an alternative, an imaginary, but also as a will and a way.

The memory of these songs and this poetry is always combined with the act of singing along. The facial expression of my father and mother while singing is a writing that accompanies the lyrics and melodies. Sometimes, their cheeks were moving as if reaching for the ‘solace’ of a cotton soft pillow, and so did my cheeks move along.

They would repeat some phrases, slowing down the song, making the meaning unfold more clearly in this space of listening. They would highlight some words adding them to our vocabulary, placing them in corners where they had no words to address a certain emotion or process a certain experience.

Also the vibrations of the vocal cords and bodies of the crowds chanting this poetry in the squares of villages and cities in Lebanon, is a writing that I had the chance to be in its living presence and resonance.

It is a literature of entanglement and complicity. As we sang along we enacted the words, we embodied the poetics and entered into that space they narrated, and we performed it; sometimes re-writing it through our different realities.

Yes, you can say it is an emotional experience of literature, or maybe even emotional literature… where emotions are trusted as knowledge, where the personal and the collective, where love and politics, spirituality and class struggle are embraced as entangled and as equally relevant.

My parents also read classical fairytales and adventures to us, like the translated children books of the German Grimm brothers, and a collection of Soviet Russian tales. But looking back at it, I feel that literature and reading was never introduced as an act of leisure. It had to engage us and elaborate a thought or deepen a subject of discussion for us. Leisure is still not seen as a political act in my family and as a form of fighting capitalism as well. I am working on it J

In my parent’s library I flipped through books on Marxism and communism, a series of small red colored books with different lithographs of Lenin and Marx on their covers. Personas like Angela Davis and the writers Fatima Al Marnissi and Nawal Al Saadawi, who wrote on female struggles for liberation, were a sensed presence in my home and upbringing, even if no one had directly read their books to me… I lived daily negotiations and reflections inspired by their works, and as a child I thought they were friends of my mother.

Comrades used to spend long evenings at our place talking and sipping whiskey, meanwhile we sneaked from our beds to get glimpses of what felt as very vivid and urgent. We learnt to converse, to listen, to be critical and to say No: to hegemony, to patriarchy, to oppression, and to make that NO generative in our lives and relations.

My father loves reading history, the library was full of books by Amin Maalouf, Abdel Rahman Mounif, Firas Al Sawah, Fawaz Traboulsi… I would sit by his side, and still do, and ask him about the book he was reading, and he would make it into a story for me. Through his readings and narrations, I started to get a sense of the complexity of writing history, of telling a story, and the power dynamics, the fiction and the performativity involved in that. Our conversations continued, and I started to have more to narrate myself after migrating to study in The Netherlands and started my practice as an artist and writer.

He still reads these writers and contemplates alterative grounds to mend the wounds of disillusionment and to rebalance the dreams of a better world to inhabit together. In my work I explore forms of refiguring those ideas we chanted and embodied. Through the different verbal and non-verbal languages, that I think and feel through and communicate with, I listen to the poetry that destabilizes ideas of borders, of place, of the self and the other. To the poetry that creates conditions for generative relations to unfold for places of togetherness. The poetry that helps us be-friend grief, loss and incomplete histories and narratives.

In my recently published debut, “Where we are not: 10 days in the life of an other”, I write with and through the experience of sending someone in my place to Lebanon, as my stand-in, to visit all the places and people that constituted the idea of home to me, and to enact a set of instructions relating to embodied memories and sensory relations. The book is a conversation with her narratives and experiences in my place, with different histories and memories of my family, and Lebanon the place I grew up in and Amsterdam the place I’ve lived in for 16 years. The understanding and writing of where I am not and where I am is only possible in the intimacy and unpredictability of relations with others.

In Dancing on the edge festival that I am co-creating with a small team, we have embarked on a year of listening and collective story-telling instead of the format of the festival. We will start on the 18th of September with a week of Walking with Grief, and deep listening, simultaneously in several cities in the world.

Roots are everywhere in the literature I grew up with, and in my work. Roots that connect me to the world not to one spot on this earth. Ramified, entangled roots that carry in them the language of the trees communicating across human made borders, temporalities and perceptions. All I need to do is to listen, to sing along and to keep moving- shift grounds.