A Letter to Hrant Dink 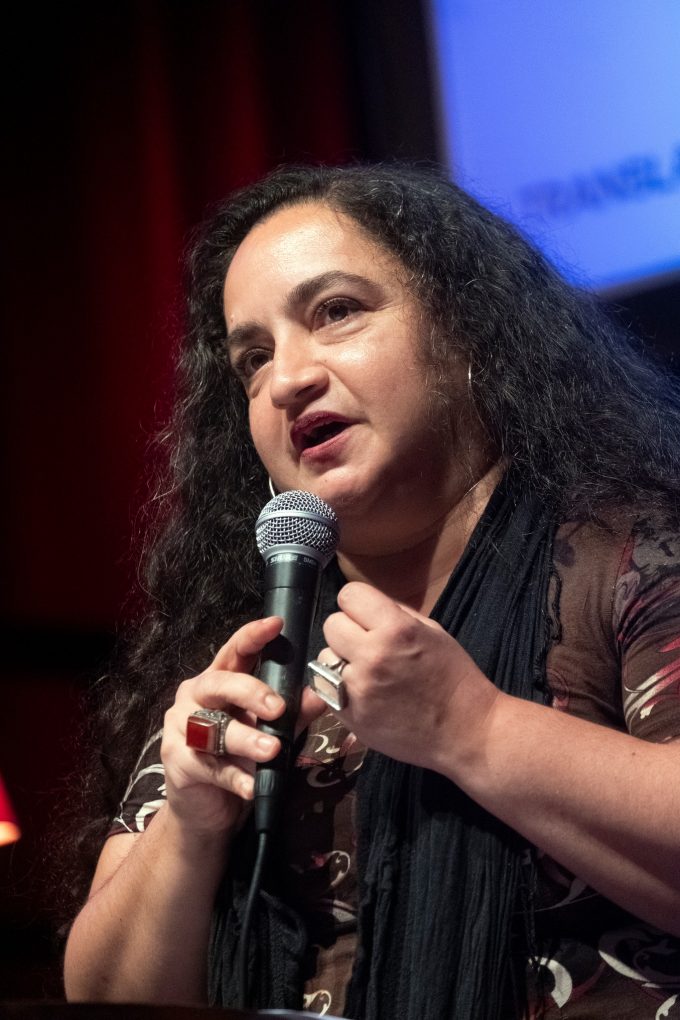 Personal pronouns repeated one after the other like a tongue twister always make me smile. And also make me think. What we call a personal pronoun is, in reality, the name of the person it addresses. This letter has more than one addressee, and therefore personal pronouns will proceed in a disordered fashion. Pointing to existence and non-existence alike.

There is an unbearable side to people in your life suddenly turning into people you only talk about. This means loss. Either via separation or death. In relation to Hrant Dink, what led to this loss was murder. It makes me cross when people say we lost Hrant Dink or Hrant Dink was taken from us fifteen years ago. We need to say it as it is. He was killed. He was murdered. He was shot. It’s much better that way. The fact that he is not able to address you directly here today and that activities are being organized in his name instead is all because he was killed. And of course, because it doesn’t all end with being killed.

Memory is a ton of weight in a country full of commemorations for massacres, murders and assassinations in quick succession on the social calendar. Strangely, the way to free your heart is directly related to your resolve to bear that weight. As a murder case that is unsolved and has been made unsolvable is commemorating its fifteenth year, what we call life is the endeavour to pull someone who was killed for his words and his origins right out of that void, and to place him back in the center of life once again as he deserves. A vigorous way of living, so to speak.

I went to Turkey’s first weekly Turkish-Armenian newspaper Agos as a twenty-three year old, when life had a more natural and gentle, rather than a vigorous, flow. The fact that I went there for an interview as an author with newly published works and came out as someone who would start working there says more about Hrant Dink than me. How he trusted you, saw things in you that you yourself hadn’t been aware of; how he encouraged you to be the best you could ever be. How he enhanced your life.

Ours was a business that could only be embarked on with the resolve and courage of a mad person; in a dingy office that had a leaky ceiling, furnished with old pieces that were cobbled together from various houses, a lift that was permanently out of order, and a resident mouse that we named Mıgır, who made an appearance to skate on the tiled floor every Wednesday evening when the newspaper was sent to print and we played ball with the crumpled-up page proofs.  Armenian people who have been used to living an insular life would, for the first time, voice their concerns and experiences to the public, not in their mother tongue but in Turkish. No-one had an exact job description. A professional designer with years of experience trying to work with a couple of journalist friends and us enthusiastic novices. My master-apprentice relationship started in this setting.

I learnt mostly by observing. And also, by listening. You wrote your pieces by tapping the keys loudly on the keyboard. The three stars that you used in between each paragraph was the high note from the loud taps. I used to laugh at your pretentious three stars. You put the truth that seemed impossible to articulate in between those three stars. You put the whole of your heart, mind and sincerity in there. I always remember your discussions that started with “I’m making this up”. How you provoked people to think and to express themselves. How you threw a childishly naive question in the middle of a most intellectual discussion. How you left all the kings stark naked with black humour.

One day you said: “C’mon, let’s pay a visit to one of our elders”, you need to see him before he dies.” In those days, Armenian veteran press journalists and authors frequently visited Agos’s office. This was a place where they were remembered, shared their experiences, and belonged. It was summer and extremely hot. We went to the hospital to visit retired investigative author Kevork Pamukçiyan. From the gap in the doorway, I watched this old-world gentleman comb his hair. He struggled out of bed and offered us eau-de-cologne and chocolate, knowing that he was going to die. And knowing that he was going to die, we talked about his health and his plans for the future. We felt gloomy when we left and you bought us ice cream to cheer us up. Ice cream was life.

Whenever my mind goes back to that day with ice cream, I visualize the scene in Ferzan Özpetek’s film ‘A Perfect Day’. A woman is walking in the streets of Rome at night, unaware that her two children have been murdered by her mentally unstable ex-husband. We, as viewers, have already watched the catastrophe that she is as yet unaware of, and we know that the police will call her soon to give her the terrible news. She on the other hand, buys a huge cone of ice cream and enjoys it. Ice cream is happiness. And it is followed by death. Ice cream becomes the final happiness. It is remembered as a dream. It is forgotten as life.

Hypotheses can be rejected, opinions can be turned into discussion items, convictions can be formed and then abandoned, but no-one can refuse someone else’s personal story. You believed in the power of this human story when you described the way Turkish and Armenian people tried to understand each other and find peace as “exchange of memories, conversations, dialogue and the all-important freedom of expression”. Because what you called an exchange of memories was to entrust each other with personal stories.

Memory is not a matter of the mind; it is a matter of the heart. It is to do with having the heart and courage to remember. It is to do with feeling the pain of burying someone who only wished to live without compromising his Republic of Turkey citizenship and his Armenian origin. It is to do with asking oneself “What, why, whose limits?” when he said: “I think I approach the issues with a courage that oversteps the limits.” It is to do with paying attention to the self-created dictionary of someone who said about the experience of being a Turkish-Armenian: “I thought I’d best remain on the knife’s edge. That is the most secure place for me.” Because he was someone who also said: “I take into account whether anyone I come into contact with has the patience to listen to me. I do everything I can to not hurt them.” He was someone who should have been protected from getting hurt. Is memory enough, do you think?

At this point exactly, it’s a good time to remind everyone your opening words in an international gathering in Istanbul in 2005, which was targeted as the ‘Armenian Conference’: “There have been arguments around the word genocide. Keep arguing. No problem. How does a whole community perceive this argument? How have they internalized that word that you try to avoid? There is an Armenian community scattered across the whole world, and they have an internalized concept and a history in their heads. Out of courtesy I won’t say that word but I will explain what it is. You can name it afterwards…”

Let no-one assume that you took the crowd with you by the fullness of your laughter and the attraction and persuasiveness of your words. You carried a lot on your own. Your loneliness was your song. You sang a heart-broken, not a blighted, song.

And you were proclaimed a ‘hater of Turks’ in the path you took to establish a language of peace. How you increasingly had to say “Let me say this again”, how your mouth got dry and how you frequently took a sip of water. Increasingly more. How you were labeled as ‘an Armenian journalist who was sentenced to six months in prison for dishonouring and deriding Turkishness’. At a time when slogans were being shouted outside the newspaper and you and other Armenians were being insulted and threatened, you said: “It’s a shame we’ve disturbed the neighboring shopkeepers”, shouldering the shame that no-one was willing to own. At nightfall you said: “You don’t have to walk next to me.” And then hundreds of thousands of people walked behind you at your funeral. The time between the two is the short history of Turkey.

Public officials, police officers, the military police and intelligence services, everyone had their share in aiding and abetting in this murder. These eyes have seen it all. Police officers who took smiling pictures with the murderer, people who wore white berets like the murderer shouting “We are all Ogün, we are all Turkish”, reports that were swept under the carpet, CCTV footage that got wiped off, police interviews waxing lyrical about the murder, government and judicial officers at the time of the murder being promoted, ministries’ abominable defence at the European Court of Human Rights and their petition to overturn the compensation they were ordered to pay, everyone throwing responsibility to each other like a dodgeball in this national murder…. I haven’t forgiven anyone, or anything.

We no longer have the opportunity to celebrate your birthday with you on 15 September. Instead, we resort to watching a recording of yours every year at the International Hrant Dink Foundation human rights award ceremony. The footage is from 2006. At that time, you were continuously being presented with human rights and journalism awards whilst also being stifled with lawsuits. You shout out your faith in an enlightened Turkey when receiving the 2006 Henri Nannen Award in Hamburg, Germany: “That country is not a dark country. It is being lit up and we endeavour to illuminate it.” Then you return to your seat in applause. The ceremony proceeds solemnly. Suddenly, you run back on stage, under quizzical looks from the host. You grab your award with a mischievous look on your face and you run off the stage again. Everyone in the hall bursts out laughing.

We laugh too when we watch you. And within a millisecond realize why we watch that recording of yours in this hall. Laughter turns into a painful smile. Happiness meets grief. Your voice continues to echo inside us: “That country is not a dark country. It is being lit up and we endeavour to illuminate it.”

You never gave up on your country. Never got tired of trying to understand. And for that reason, we continue to cast your light in every personal pronoun.